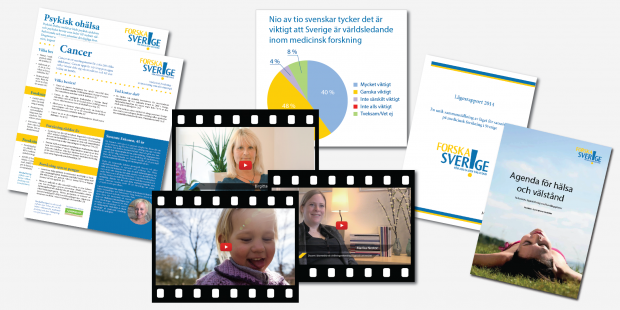 Our mission is to inform and raise awareness of the importance of medical research - for health and prosperity.

This is done by providing decision-makers with facts and evidence-based proposals for change. We have increasingly become a platform for constructive discussions for all actors concerned with the life science system in Sweden.

Research!Sweden is a neutral platform which makes it possible for us to engage key opinion leaders in society. Through this platform we also increase the number of channels bringing forth the importance of medical research and business for Sweden, as well as more specific issues when needed. Research!Sweden has proven success in getting published in media and the yearly Resarch!Sweden-day gathers top-leaders in politics, business and academia in exclusive discussions.

Research!Sweden has high credibility due to our non-profit status, a board with experts representing a variety of stakeholders and the high level of our founders, including Nobelprize laurets, former prime ministers, movie directors and industry icons.

We have developed a personal network with politicians and policymakers, providing them with evidence-based policy advice, ideas for motions, providing visibility at conferences and through traditional and social media. We monitor political statements in order to give attention to politicians who present propositions that would benefit the environment for life science, and likewise, react to propositions that would harm it.

Many studies show the high societal return of investments in medical research and Research!Sweden advocates an increase in public investment. We perform a variety of activities such as opinion polls and we are active in introducing proposals to the different ministries on how to move forward with actions that improve the conditions for medical research and its implementation. We raise issues through media as well as conferences.

Research!Sweden wants the government to develop and implement a coherent and long-term strategy for creating better conditions for medical research and its applications. We have argued the case in several articles in media, as well as at conferences.

In January 2013 we presented the document “First steps toward a life science strategy”, with concrete proposals that we actively discuss with the government, ministries and politicians from all parties. We launched an updated version in 2014 and later on that year the government ordered a report on life science in Sweden, highlighting the needs to be lifted in a future strategy.